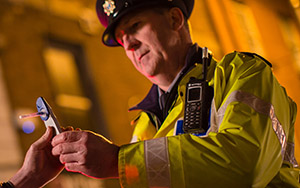 Driving under the influence of drugs has been an offence in Ireland since 1961.

Prior to the new laws – the Road Traffic Act 2016 – a Garda had to have a specific reason to stop an individual under suspicion of driving under the influence of an illicit drug before they could take further action.

In these cases, the Garda had the power to conduct roadside impairment tests, such as walk and turn test, one-legged stand, finger to nose test, Romberg test and pupil examination.

Prosecutions were made on the result of the impairment test and/or the results a blood sample analysis.

Garda now have the power to conduct roadside drug testing and the previous requirement to prove impairment or incapacitation no longer applies for cannabis and cocaine use.

The presence of one of these drugs, above a specified limit, is now enough to be arrested for drug-driving.

Under the new measures, a Garda can carry out roadside drug testing, similar to the current mandatory alcohol testing.

This device can analyse a saliva sample to detect the presence of four different types of drugs:

So what happens if you are tested?

According to a spokesperson from An Garda Síochána, “the oral fluid test is not used for evidential purposes but as an indicator of the presence of drugs. Prosecutions will be taken on the basis of the blood test conducted following arrest.”

In relation to cannabis, cocaine and heroin the limits (units in whole blood) set out in the Act are:

The oral fluid test will detect the presence of THC, an active ingredient in cannabis.

How long THC is detectable in saliva in someone’s system after taking it isn’t straightforward.

When asked about THC elimination rates and the oral fluid test, a spokesperson from the Department of Transport said: “The oral fluid test has a THC cut-off of 10ng/ml. Generally, THC levels in oral fluid are typically less than 10ng/ml 6 hours after last use, but this depends on many factors such as tolerance, dose, potency etc.”

The Road Safety Authority’s (RSA) ‘Preliminary Drug Testing – Frequently Asked Questions’ provides the following information on elimination rates: “It is recommended to wait 24 hours after last using cannabis before driving. If you are sure you are no longer impaired as result of taking cannabis and more than 6 hours have elapsed since last use it should not be possible for a Garda to detect impairment and the Δ9 -Tetrahydrocannabinol (THC) level in you oral fluid should be lower than the detection limit for the Cannabis test on the Drager Drugtest 5000.”

However, results from a study in the Clinical Chemistry Journal in 2012 found that THC was still detectable using the Drager Drug Test with the same 10ng/ml cut off for periods of 2-22 hours among a group of people who smoked one single joint with a 6.8% THC concentration level.

What is clear from the research about THC elimination rates, THC will be detectable in the body for longer periods of time for chronic frequent users when compared to occasional users.

What is also clear is that it is not possible to accurately identify the amount of time it will take for THC to not be detectable in the system after use.

According to the RSA Preliminary Drug Testing – Frequently Asked Questions: