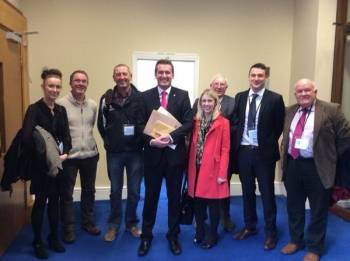 The meeting was frank and open. The Minister was interested in hearing about the work of the Local and Regional Task Forces. We proposed an Agenda which the Minister accepted.

The first item on the Agenda was Partnership. We spoke of the very good working relationship that exists within both Task Forces, between the HSE, other Statutory Bodies, Local Public Representatives and the community sector. While we were meeting him as a joint delegation we emphasised the difference between the issues being addressed by both Task Forces and the need to retain two Task Forces in the region. The Minister accepted this.

We spoke with the Minister about the Alcohol initiatives in the region. The primary drug in 80% of drug related problems addressed by the HSE in the Cork Kerry region relate to Alcohol. The Local and Regional Task Forces are linked with the Alcohol Forum and are actively engaged in providing three pilot sites for research into the consequences of alcohol misuse in the community. The Minister indicated that the Public Health (Alcohol) legislation may be implemented before the General Election.

Regarding Resources we pointed out that we had reduced funding over the past five years and that we had done our best to maintain front line services in the face of financial cutbacks. The Minister acknowledged the difficulties experienced and hopes that there will be improvements in this area going forward. However, at this time he could not give any undertaking regarding resources.

David Lane pointed out to the Minister that with a relatively small amount of funding he could support three day alcohol services in the region similar to the Anchor Centre in Mallow. With an additional €600,000 the HSE could support a service in North Cork, East Cork and South Kerry. The Minister was interested in this proposal. These centres would address many of the problems experienced in families and communities in some remote areas.

Joe Kirby gave the Minister an update on the National Rehabilitation Framework and its implementation in the Cork Kerry regions. There is greater co-ordination of case management and collaboration with Homeless Services.

The next item on the Agenda was Medically Supervised Injecting Centres. The minister gave us his thinking on this and the current situation politically, legally and practically. We gave the Minister a letter outlining our position on MSICs. Our Task Forces supported the Minister in this initiative and pointed out how matters are currently being dealt with in Cork. We expressed an openness to have a centre in Cork. The Minister believed that it would take some time to bring in the necessary legislation. But he believes it will be included in any new Programme for Government. It is not likely to happen until the end of 2016. Finding a suitable and publicly acceptable location is likely to be a major challenge in Dublin or any other city.

On the issue of Decriminalisation the Minister outlined the complexity of the issue. He hopes to progress the matter but reckons it could take many years for it to be implemented due to the challenges of public opinion and the drawing up of the necessary legislation. As a Minister he realised that he had a short window of opportunity to make a difference and he had chosen the MSIC and the Decriminalisation issues as his priorities.

We presented the Minister with a copy of our Strategic Plan and the Minister outlined the new structure being established to formulate the next National Drug and Alcohol Strategy.

The meeting lasted almost ninety minutes and was held in a good spirit of openness and collaboration.