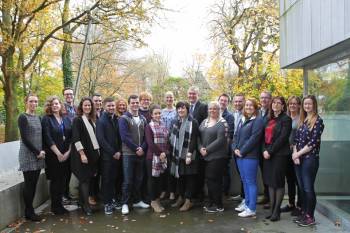 A new pilot initiative aimed at tackling excessive alcohol consumption among third-level students’ across Ireland has been launched in UCC.

Responding to Excessive Alcohol Consumption in Third-level (REACT) – is the first-ever national award and accreditation scheme which will recognise third-level institutions’ efforts to reduce excessive drinking among their students. The scheme has been developed following a rigorous review of previous efforts to reduce excessive alcohol consumption across 3rd level institutions.  It includes a comprehensive range of evidence-based action points which have been designed to tackle harmful drinking amongst students’. In total, the REACT Award has eight mandatory and eighteen optional action points. These action points include training relevant staff in brief intervention, implementing a student alcohol policy and setting up a dedicated REACT steering committee in order to implement the programme. Optional action points include providing alcohol-free accommodation and social spaces for students as well as providing late-night transport to student accommodation.

At this afternoon’s launch, UCC’s Department of Epidemiology and Public Health’s Dr Martin Davoren, explained that the design and introduction of this pilot programme has been fuelled by the need to reduce excessive alcohol consumption and related harm among third-level students in light of recent studies, including a UCC study published last year in the medical journal BMJ Open.  Dr Martin Davoren states “a decade ago, the College Lifestyle and Attitudinal National Survey noted that male students were drinking more than their female counterparts. What we are now seeing is that female students drinking as much as men. This finding is yet another signpost that our relationship with alcohol as a nation is unwholesome and detrimental to health. The REACT Award and Accreditation Scheme aims to arm third-level institutions across Ireland with the artillery to tackle excessive alcohol consumption in a strategic, evidence-based manner.”

Dr Michael Byrne, Acting Head of UCC’s Student Experience and Co-Coordinator of UCC Health Matters welcomed the new initiative, adding that it marked an important stage in addressing Ireland’s ongoing problem with alcohol; “it is important that efforts by 3rd level institutions and our student bodies to tackle alcohol related harm amongst students be recognised and rewarded. The REACT award and accreditation scheme is part of a wider national approach to tackle alcohol related harm in Ireland. We look forward to working with the Union of Students in Ireland on this important initiative.”

REACT-which is jointly funded by the Health Service Executive and philanthropic support- has been developed in collaboration with UCC Health Matters and the Union of Students in Ireland under the guidance of Dr Michael Byrne, Head of Student Experience at UCC, and Dr Martin Davoren, an alcohol researcher at UCC. Partner institutions’ include UCC, TCD, DCU, I.T. Tralee, I.T. Sligo, I.T. Blanchardstown, Mary Immaculate College, GMIT and CIT.